Check out the first look of Akshay Kumar in Laxmmi Bomb:

As the title suggests this film is a firecracker that will shock and awe you. On the occasion of Navratri, Akshay Kumar shared the first look as laxmmi from the Raghava Lawrence film Laxmmi Bomb. And this is by far the most we have seen the actor coming out of his comfort zone.

Check out the first look below:

Navratri is about bowing to the inner goddess and celebrating your limitless strength.On this auspicious occasion,I am sharing with you my look as Laxmmi.A character I am both excited and nervous about… but then life begins at the end of our comfort zone…isn’t it? #LaxmmiBomb pic.twitter.com/TmL9U1OXdk

Akshay Kumar is seen dressed in a sari and standing next to a Durga idol with Mahishasura at her feet, Akshay looks daunting. He wrote: “Navratri is about bowing to the inner goddess and celebrating your limitless strength. On this auspicious occasion,I am sharing with you my look as Laxmmi.A character I am both excited and nervous about… but then life begins at the end of our comfort zone…isn’t it? #LaxmmiBomb.”

This film is the remake of South hit Kanchana, Laxmmi Bomb is a horror-comedy being directed by Raghava Lawrence with Kiara Advani as the leading actress.

Akshay earlier shared a sneak peek of the character where he was seen applying makeup on his face. “Bringing you one bomb of a story,#LaxmmiBomb starring @Advani_Kiara & yours truly!Bursting in cinemas on 5th June,2020. Fox Star Studios Presents. A Cape of Good Films Production in association with Shabinaa Entertainment & Tusshar Entertainment House. Directed by Raghava Lawrence,” he wrote.

This is powerful! @akshaykumar does it again with another thrilling look. This film looks 👌 #LaxmmiBomb https://t.co/A1mR1uGw1s

After watching @akshaykumar ‘s back to back versatile characters, all other actors be like,
“Kya karein hum…naukri chhod dein?”#LaxmmiBomb

Haters may troll this look or make fun of it, but deep inside even they know it needs guts to do such kind of character & entertain audience with such risk hats off @akshaykumar proud fan! 🙏😘 #LaxmmiBomb pic.twitter.com/nGBirl9V49

Hattss off to Akshay kumar sir , u must need guts to do such role , u have proved that u can do any role with ease. 👌👌👌👏👏👏
proud of u as always. Best of luck & God bless u with lots Success #LaxmmiBomb https://t.co/EqK7LLK5W5

MOST VERSATILE SUPERSTAR @akshaykumar 🔥😎
You need guts to do this kind of roles. Padman , Toilet Ek Prem Katha & Now #LaxmmiBomb !!

Koi bhi look ho …he does it like a boss. .#LaxmmiBomb pic.twitter.com/TBccwhDxt1

#LaxmmiBomb the unbeatable king of versatility the one and only #akshaykumar pic.twitter.com/n0ZAmbZhjD

As per the sources, Akshay will be seen playing the role of the protagonist who gets possessed by the spirit of a transgender, Kiara will portray the superstar’s girlfriend in the movie. The script has been modified to suit the Hindi film audience. 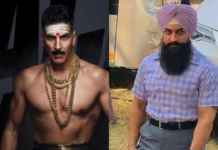 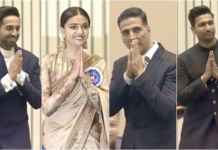