The sexy and vivacious Kareena Kapoor turns an year older today. This is going to be an interesting year for the actress, with Heroine hitting the screens on her birthday and her wedding which is scheduled for October. For her birthday celebrations, beau Saif plans to whisk Kareena to London after her film Heroine releases. Here’s wishing the style queen Kareena a very happy birthday.

Here is a list of her best songs over the years.

Halkat Jawani for Heroine
Heroine is purported to be Bebo’s best movie till date, halkat jawani sees Bebo scorching the screen with her dance moves. Allegedly Madhur has photoshopped the song to give Kareena a sleeker look and a flat tummy.

Dil Mera Muft from Agent Vinod
Kareena’s first mujra act was criticized by many for being a mix dance and not a mujra performance. But the actress looked lovely in her fuchsia dress. Agent Vinod was Saif’s home production and bombed at the box office. The sensuous song was choreographed by Saroj Khan and Bebo okayed on this item number for her love Saif.

Rasiya from Kurbaan
This song created a storm with sensual, sexy moves by real life couple Saif Ali Khan and Kareena. In this song Kareena plays a seductress to the hilt.

Chhaliya Chhaliya from Tashan
Kareena changed tremendously for this movie, gone was the plum pretty Kareena. The fans saw a sexy and chiseled size zero Kareena. It is said that she changed her figure as she had to don a bikini in this song. This was her first bikini sighting. She also started dating Saif Ali Khan during the shooting of this film.

Mauja from Jab We met
This was Kareena and her then beau Shahid Kapoor’s first hit. The movie is seen as one of the most romantic movies in new age cinema. Unfortunately the couple broke up right before the movie was released due to Kareena’s new found alliance with Saif Ali Khan.

Yeh Mera Dil from Don
Yeh mera dil was Kareena’s rendition of the famous song by Helen in the original Don. Kareena idiolises Helen and did the act as a tribute to the actress. 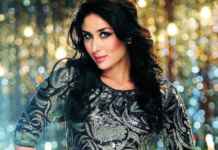 Get Kareena’s glam look from Heroine