Checkout how internet celebrates after gay sex was dis-criminalized in India:

Supreme Court made it a historic moment for India by not only decriminalizing gay sex but also with a verdict against section 377. With it, this marked as the beginning of equal rights for the LGBTQ community in India. As per the judgment, CJI Dipak Misra stated, “I am what I am. So take me as I am. No one can escape from their individuality.” The verdict also says, “History owes an apology to the LGBTQ community for denying them rights and compelling them to live a life of fear. We can’t change history but can pass way for a better future”.

No sooner the verdict came, internet flooded with memes and cartoons joining the celebration with the LGBTQ community. Checkout how internet is loving the decision:

Had to distract self from compulsively refreshing Twitter so made dis. pic.twitter.com/mkQOH8Orny

can’t think of a better time to repost this pic.twitter.com/CIv83bbTTJ

#377 cartoon done in july this year has come true pic.twitter.com/peD18EHlHY

“How strongly must you love knowing you are unconvicted felons under #Section377 IPC … This is not a sexual act. This is love that must be constitutionally recognised.”@MenakaGuruswamy#LoveIsLove #Section377Verdict #happydays #LoveWins pic.twitter.com/l89JwEfhsU 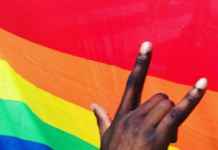