All About Women
Home Glamour Gossip Parineeti & Arjun indulge in fun banter, then this happened

Actress Parineeti Chopra shared a few snaps from her holiday in Austria and looked radiant. The picture caught the attention of many people, including her co-star and friend, Arjun Kapoor.

The ‘Sandeep Aur Pinky Faraar’ duo exchanged remarks and teased each other when Arjun commented on the actress’s picture.

‘ I take selfies now’ wrote Parineeti on which Arjun commented “I’ll give u my camera u take mine also,” and this is what she had to say:

Parineeti was referring to the actor’s week-old post with his Land Rover Defender and he seemed to have become fitter. Here is the picture:

The duo started their career with Ishaqzaade together in 2012 and have shared the screen in few other films including their latest release Sandeep Aur Pinky Faraar. Due to COVID-19 restrictions, the film was released on Amazon Prime but their performance was appreciated by many. 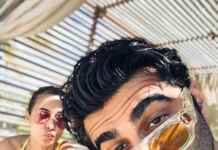