Yes you heard it right! Saina Nehwal and Parupalli Kashyap are all set to tie the knot December this year. Their date of marriage is said to be December 16. As per reports the badminton stars will tie the knot in a private ceremony with a grand reception on December 21.

Reports say that the duo were dating each other since long. Saina Nehwal at several times have been clicked partying with Parupalli and other teammates. She has also shared pictures of Parupalli on Instagram thanking him for his support always.

He is always given me great motivation and support ☺️☺️🤗 @parupallikashyap … missed u at the commonwealth games this time ….

After battling a knee injury Saina is back with good form this season.  Her marriage comes as a surprise and we wish them a happy married life together. Saina, last month, had won a bronze medal in the Asian Games where after receiving the medal, she thanked Parupalli Kashyap too along with coach Gopichand.

I would like to thank Gopi Sir for all the hardwork and support … also @parupallik for giving me great match inputs and for helping me in sessions before the #AsianGame2018 … lot of efforts of Physios would like to thank @ArvindDNigam4 and Kiran challagundla sir.. 👍👍 🥉 pic.twitter.com/dznm2DmmGc 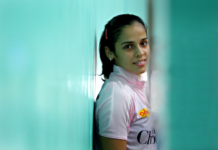 Saina Nehwal one step away from becoming world No 1