Finally the god of cricket, Sachin Ramesh Tendulkar is all set to start second innings of his career as an actor in his own biopic: Sachin – A billion dreams. The 42 year old’s acting debut shall be directed by award winning British director James Erskine.

Sachin released the poster via his Facebook account yesterday which shows Sachin’s story as: 55 days of training, one pair of trousers, Sachin’s story. The music is given by Oscar award winning maestro A. R. Rahman.

Thank you everyone for all the love and support over the years! Here’s the first poster of my upcoming movie Sachin The Film Watch the #SRTteaseron14thApril at 1 PM.

Superstar Shahrukh Khan is keen to watch his close friend Sachin’s film. How excited he is, shows his twitter feed:

This one I have to watch. Show me NA soon my friend. https://t.co/DeIxqGGc4v

To which Sachin replies:

He dreamt. He toiled. He conquered. Here’s the poster of @SachinTheFilm. Watch #SRTteaseron14thApril 1 PM @sachin_rt

Walking in with @sachin_rt was like walking wth a lion in the forest. Watch #SRTteaseron14thApril 1PM @SachinTheFilm pic.twitter.com/HbkJwYw49Z

The first look shows the journey of the cricketer who played 200 tests and scored 100 centuries in all the three formats of the game. During retirement in 2013, he played total 664 international matches with 34,357 runs. Sachin was honored with Bharat Ratna last year with massive campaigning by fans of him which are countless. Presently, he is a sitting member of Rajya Sabha.

With combination of all the legends of their fields, looks like this film is going to break all the box office records made till today. The trailer will be released on April 14, 2016 at 1 pm. 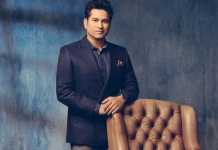 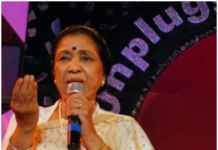