Check out the tweets congratulating Amitabh Bachchan as he receives Dadasaheb Phalke Award:

Amitabh Bachchan is pleased and humble as Minister of Information and Broadcasting Prakash Javadekar announced that the Bollywood megastar will be receiving the prestigious Dadasaheb Phalke Award.

The legend Amitabh Bachchan who entertained and inspired for 2 generations has been selected unanimously for #DadaSahabPhalke award. The entire country and international community is happy. My heartiest Congratulations to him.@narendramodi @SrBachchan pic.twitter.com/obzObHsbLk

The actor took to Twitter to share his feelings, he wrote: There is a paucity of words searching a response.. for the generosity of words that pour in ..I am but deeply grateful and most humbled .. my sincerest gratitude ..,” tweeted Bachchan.

T 3298 – There is a paucity of words searching a response .. for the generosity of words that pour in ..
I am but deeply grateful and most humbled .. my sincerest gratitude ..

Further, Amitabh Bachchan wrote on his official blog, “..what really resides in the mind shall never ever be known .. and may it never.. gratitude and the express of immense humbleness bear supreme today ..and love

Following this many other celebrities including Lata Mangeshkar, Rajnikanth, Karan Johar, and Anil Kapoor congratulated the actor for the same.

Check out the tweets below:

As a Dadasaheb Phalke Award Jury Member, I am pleased to congratulate Shri. Amitabh Bachchanji on his getting this Prestigious Award

Anil Kapoor wrote, “There is no mention of Indian cinema without this Legend! He has redefined cinema with every role & deserves every accolade for his innumerable contributions! Congratulations.

While Karan Johar wrote, “The most inspiring legend of Indian Cinema!!!! He is a bonafide rock star!!! I am honoured and proud to be in the Era of AMITABH BACHCHAN! The prestigious #DadaSahebPhalkeAward  to @SrBachchan.

Amitabh Bachchan is the 50th recipient of Dadsaheb Phalke Award. Last year actor late, Vinod Khanna was honored with the award. This award is considered to be the highest honor in Indian Cinema and is present manually by Ministry of Information and Broadcasting. It is given to a person for their outstanding contribution to the growth and development of Indian cinema. 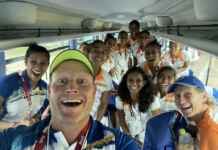