Actress Rhea Chakraborty is charged by NCB for Narcotic Substances

The NCB (Narcotics Control Bureau) filed charges against Rhea Chakraborty and her brother on Wednesday in a drug case which is linked to Sushant’s death. The NCB filed charges before a special court as reported by PTI wherein, Atul Sarpande, special public prosecutor also said that the prosecution maintained proper charges against all the accused.

The charges against Rhea and her brother Showik are for the heavy consumption of drugs and narcotic substances and for paying for such drugs for the late Sushant Singh Rajput. When Sushant committed suicide on June 14, 2020, at his Mumbai residence, the court was scheduled to draft charges against Rhea at that time but it couldn’t become possible due to some unforeseen reasons of the discharged applicants. 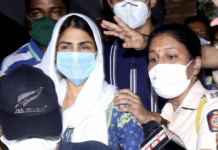 “I am so middle class” trends after Rhea’s dad says it!