The biggest wedding of this year is just about to commence, and as expected Ambani and Mehta families started the celebrations in a grand way. Akash Ambani and Shloka Mehta are all set to tie the knot on March 9, 2019. The couple is currently enjoying the lavish pre-wedding festivities before exchanging the vows.

Last night, the Ambanis and Mehta started the wedding celebrations with a great musical night that took place that Ambani residence, Antilia in Mumbai. The family danced to the tunes of Garba singer Falguni Pathak who gave a live performance. In a Gujrati family Garba is an important part.

The entire Ambani family was present at the event. Few pictures from last night are doing rounds on social media.

Akash Ambani is all set to tie the knot with diamantaire Russel Mehta’s daughter Shloka on March 9. Counting down to the big day, the families kicked-off the pre-wedding festivities at the Ambanis Mumbai home with a dandiya night, that saw performances by singers Falguni Pathak and Tushar Trivedi. Link in bio for all the details. . . . . #AkashAmbani #AkashAmbaniShlokaMehta #AkashAmbaniShlokaMehtaWedding #AkashShlokaWedding #AkashShloka #Ambanis #AmbaniWedding #Antilia #RusselMehta #ShlokaMehta #Ambanis #FalguniPathak #TusharTrivedi #MukeshAmbani #TinaAmbani #KokilabenAmbani #NitaAmbani

For the celebrations, Groom’s mother, Nita Ambani wore a Sabyasachi outfit and jewelry.

The couple will get married at the Jio World Centre in Bandra Kurla Complex, Mumbai next month. Akash Ambani and Shloka Mehta got engaged in June last year in a lavish three-day ceremony that was held at Antilia.

As per the sources, the groom Akash Ambani is preparing for his grand bachelor’s party in St.Mortitz, Switzerland from February 23 to 25.

Akash and Shloka were childhood friends who fell in love with each other. Akash proposed Shloka for marriage last year, at a family getaway in Mahabaleshwar.

After the grand wedding of Isha Ambani, Akash’s wedding seems to be an even outstanding affair. 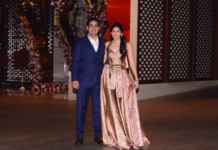 Ambani Birthday video for Shloka is not sweet 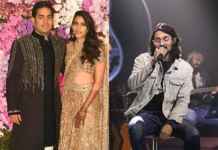 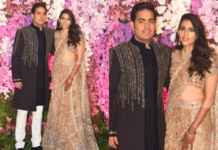 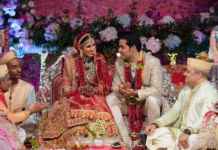 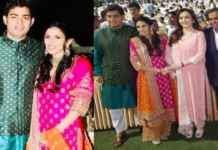 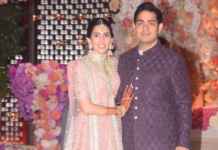