All About Women
Home Glamour Gossip Groom goes skydiving to join his Baraat!

Check out the video of the groom as he skydives to join his baraat:

Various new ways are coming up for bridal entry, but we witnessed the amazing groom’s entry as well. There are grand entrances at weddings and then there comes Akaash Yadav’s entry. He dived from an aircraft even as around 500 guests cheered him on from the ground.

The groomsman said that only we would do this. Before looking up to the blue sky as the parachute glides down.

The video of him gliding down to the wedding venue has is doing rounds on social media and shows guests at the wedding trying to spot him in the sky.

Yadav said he initially wanted to arrive on a boat with friends and family. However, when they discovered that wasn’t possible due to legal reasons, he considered the aerial route.

The photographer who covered the wedding said that the groom’s entry was “crazy”, and it was the first time he had seen something like this.

He also explained how difficult it was to capture.

“We had to coordinate the dive, with not only us being ready, but also the 500 Indians during the baraat. Plus, remember, we had no contact with the groom after he took the plunge. So we literally were left to look up and anticipate his jump,” the photographer said in an interview.

Yadav said: “I smiled and looked at my planners and said ‘if I can’t come by sea then I’ll come by sky’. They laughed and when it quieted down, I said, ‘No, I’m serious’. And the rest is history,”

The groom said he didn’t expect the video would go viral. “I had no idea people would freak out the way they did. I told my brother that morning as he was waking up that I was skydiving into my baraat and he said ‘shut up, no you’re not’ and went back to sleep. I did it 100 percent for me and the fact that it’s gone viral is just icing on the cake.”

The bride and groom are both professional dancers and actors in the US and they recently got married in a Hindu ceremony. 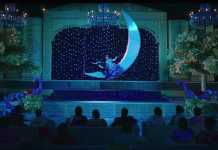