Jackie Shroff is one of the most bindaas Bollywood actors. He has that magic to create an aura of happiness and positivity wherever he goes. Although he has been quite often seen in headlines for doing some or other social work but, this time his humble attitude has won many hearts.

Recently the actor has uploaded a video of his with a title “Lucknow Traffic Control “. In the video, Jackie Shroff is assisting traffic to get it cleared as soon as possible. We can also hear some people saying “Jackie dada clearing the traffic for us.” Since this post has been shared on social media, twitterati cannot resist from applauding him for such a down to earth attitude. People are praising him for playing a traffic cop role in real life. The video has been seen 17,500 times on Twitter and received 94,056 views on Instagram respectively. On the work front, Jackie Shroff is currently shooting for Sanjay Dutt’s Prasthanam, a Hindi remake of Telugu film. He will also be seen in Baahubali and son Tiger’s Student of the Year 2.

Check out the Video Here :

People’s heartwarming comments for the Actor:

Love u dada# and nice dada

That’s the real dada,, from the front… Nice. Thanks 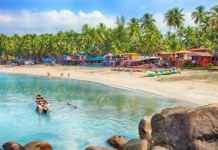 Goa to reopen for “wealthy tourists” twitter reacted to this